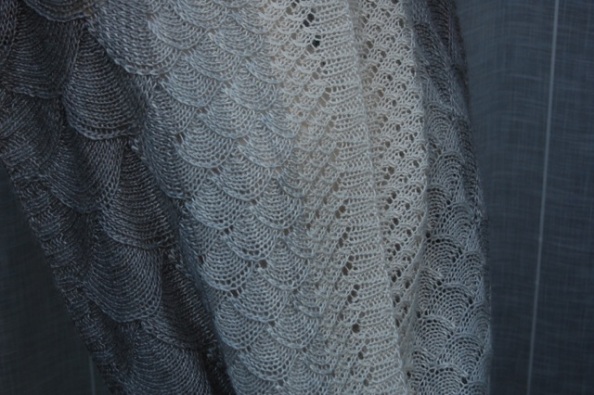 Song of the Silvery Sea

I wanted to show how you could use the revised pattern for Song of the Sea to make your own personal project. I wanted to make a longer, wider, ombre version. In sportweight. I think that’s enough modifications, don’t you? I have a bit of an obsession with Blue Sky Alpacas Metalico right now. The natural sheen and undyed beauty of baby alpaca and raw silk is amazing, and that’s before you even touch it.

For my project, I wanted a denser fabric, so I chose 24sts per 10cm/4” before blocking with 3.5mm/US4 needles. Therefore, I needed to cast on more stitches to allow for more sts per 10cm/4”. I also wanted to make it at least 120cm/48” around, and if after blocking it came out longer, that would be OK with me because I’m tall. I also wanted it to be more like 30cm/12” wide. Luxurious? Extravagant? Definitely.

So, I took a deep breath and cast on 304sts. I was going for broke; no half measures. However, if you wish to recreate this project, I recommend casting on 272sts because it did block longer than I really needed, and I absolutely went to the wire with yarn useage. I have plenty of platinum left because I wanted to change colour, and leftover yarn is always the price we pay for colourwork. But I pushed it with the other colours on the smaller repeats, and therefore have barely a gram left of silver and opal! I weighed and weighed and weighed because I wanted to use up the yarn; I wanted to show that its now possible to do this with the revised pattern. So I did.

I did try just steaming it to keep the texture, to see if that would be enough, but I wasn’t that happy with the finish.  Wet blocking made it look its best. Finished, it is 31cm/12” tall and 135cm/53” around. I blocked it for length rather than width because I felt it was wide enough when it came off the needles. Also, I didn’t want to lose the curve on the waves by stretching them upwards too much. After blocking, the gauge was 22 sts to 10cm/4”. Casting on 272sts will give you approx 125cm/49” around, and that’s plenty big enough.

Prefer warmer tones to my grey? Metalico is also available in honeyed hues, which I know some of you would prefer. I’d suggest trying Cinnabar 1615 (A), Gold Dust 1613 (B) and Opal 1610 (C) (see how beautiful they look together). In either greys or golds it will look timeless.

If you prefer a little colour, I’d suggest trying Blue Sky Alpacas’ Alpaca Silk instead, because the weight and metreage is the same as their Metalico. The colour palette has some great options for an ombre project. There are tonal groups of pinks, plums, aquas and greens from which to choose.

I was recently asked what was my favourite finished project I’d made. I couldn’t choose just one. But now I can. It’s this crazily luxurious, spectacularly beautiful Song of the Silvery Sea. I just love it! Have I inspired you to make an ombre version too?

4 thoughts on “Song of the Silvery Sea”