It’s hard to stop work when the yarn is this beautiful!

I need a vacation! I’m having some down-time until the kids are back at school in early September. Obviously that means I need vacation knitting, doesn’t it?

I have at least three times as many projects whirling round my head than there is time to knit – even on vacation. I know this is normal (for a knitter).

I did burn through 3 skeins of 4ply/fingering on holiday last year, in about 10 days flat, but that is about as fast as I get. I was on a monogamous mission to make my Stay Awhile in Tweed Imps. This year I have a selection of smaller projects, so we’ll see what happens.

First, I have a pair of Slipstream Mitts already on the needles. They’re in Whimzy Twisted MN in Lost Meadow, to match the hat and cowl I already made. I started these mitts two-at-a-time and now I can say I’ve tried that technique. I can see if it was a project that was staying at home, or if two-at-a-time would help with making them match through a lot of modifications, then it would work. But the rats’ nest that I kept pulling out of my handbag was getting annoying: I spent as much time untangling as I did knitting the odd round. So, those mitts are now one-at-a-time and need finishing.

Slipstream Mitts: on the needles

There is the guilt project, which I should knit: Aeolian by Elizabeth Freeman. I started mine about 18 months ago, decided to mod the border and it was going swimmingly for about 6 months. Then I failed to follow the pattern and spent a couple of traumatic evenings fixing my mistakes. So, I’ve put myself off finishing it in case I’ve screwed my major border mods. Yes, I know it was a perfectly good pattern but I couldn’t help myself. And I know the overly-casual knitting in front of the telly and the mods done painstakingly at the kitchen table are entirely different things but I still feel like I lost my mojo with this project. It’s been in the sin bin for about a year now, and people are asking after its health. There are only about 20 rows left. I really ought to finish it! Um. The rows are about eight or nine hundred stitches long now. Still a bit daunting, then. Aeolian remains a definite maybe.

My Aeolian shawl project: scary repairing and pattern modifying is done. “Finish me!”

A different kind of guilt is induced by the fact I haven’t knit anything substantial for the kids for a while. I made them Sue Stratford’s tiny Christmas mousies last year so that I wouldn’t have to suffer the rejection of more substantial gifts. They adore anything fluffy, so those were a winner, but I can’t see my son actually wearing anything as exotic as angora. They’re at the age where they have strong opinions on what they wear, unfettered by any consideration of how much time, love or money has gone into making the garment.

I have some leftover Fyberspates Vivacious 4ply in Deep Forest, which my green-obsessed son loves and wants me to knit for him. There’s just enough to make a great Sockhead Hat by Kelly McClure. It’s plain enough for his tastes, there are big boys photographed wearing it, it’s green, it’s compact size and ease of knitting will make it a good car/handbag project, and I love the colour. So that’s a plan.

My daughter is having a really girly patch. Yes, a pink dress has been requested. Georgie Hallam’s Rainbow Dress should work with some (discontinued) Rowan Belle Organic DK wool/cotton that I’ve had sitting in stash for my daughter for a while…probably since she was born! The pattern suggests a bouncy yarn works best, which to me means wool, but I think I’ll be OK with the wool/cotton mix. It will drop a bit more, which is fine for her, and make a lighter fabric. Fingers crossed! If it looks like the yarn is going to slide away under its own weight then I might have to stop short with a tunic length. I’d love to make it in stripes or a more exotic yarn, but pink is what she wants.

For myself, I’m itching to knit Miss Babs Yummy in Berlin, which is for a new sample for Painted. I’m making several versions of Painted to test it out in a wider range of yarns. I want to show some great options come March, when this Loopy Ewe club pattern will become available in my Ravelry shop. I can’t wait to share the one a friend has made in Blue Moon Fibre Arts: Socks that Rock Lightweight. You’ll have to wait til March! It’s a straightforward pattern, the rows are short, and I’ve always felt like it’s zipped along when I’ve made it before (this’ll be my third – I get addicted to my own patterns too!) so this should be fun knitting.

I do have another design of mine on the needles. I’m saving it for slumping on the sofa and watching films because the rows are long. I can tell you it’s in Madelinetosh Tosh Merino Light, in Mandala, which is just beautiful. The pattern might just have something to do with Song of the Sea, but I couldn’t possibly comment! 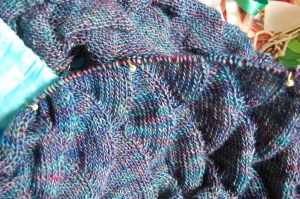 A new sample, possibly related to Song of the Sea!

I’m trying to resist swatching or experimenting with design ideas. I need a break! I need to knit some things where I’m not thinking too hard about modifying every row. I am desperate to pop open some of my new Countess Ablaze skeins though…

See you in a few weeks, when I’ll be getting ready to launch a gorgeous Autumn pattern (or two) at Yarndale.

In the meantime, I’m enjoying the Summer. I’ll keep posting my progress on Instagram.