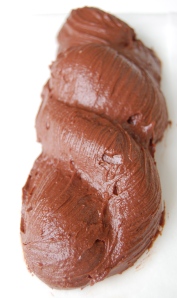 I know I’ve mentioned previously that I’m in awe of handspinners. For my first attempt at spinning a yarn, I wanted to make something really luxurious and indulgent.

May I present to you the first skein of yarn I’ve spun; I love the rich chocolatey sheen! It’s just so silky.

It almost looks good enough to eat, doesn’t it? I admit it’s a tiny bit lumpy in places but happily that will improve with practice.

I really fancy making a Foolproof project, so I made this “vanilla” colour too. They look totally delicious together, don’t they? Definitely ready for stripes. 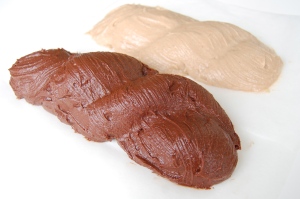 I followed these instructions, handed down by the author’s grandmother. It adds a touch of one of my favourite sources of inspiration: all things vintage. I did leave out the suggested alcohol since I felt that spinning whilst under the influence would not be wise, especially for a novice.

It was quite difficult to wind the skeins into balls: the yarn just kept breaking. I guess I will get fewer weak spots next time. 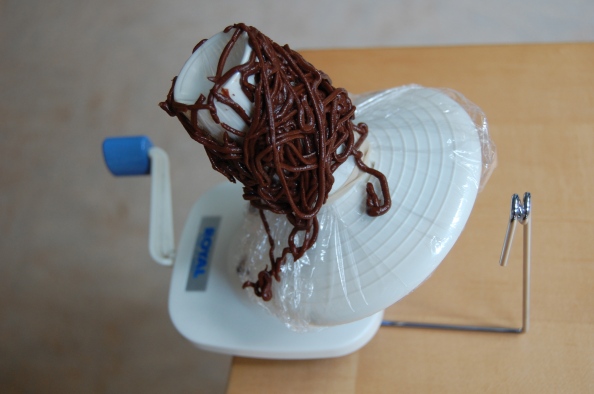 I know I don’t need to make a gauge square to make Foolproof with any yarn, but I was itching to try out my yarn to see how it behaved. I confess it’s surprisingly sticky to knit, would you believe? I’m getting about 9 sts per 10cm/4″. 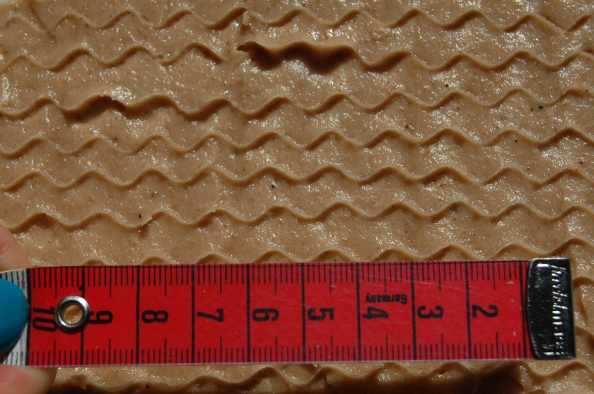 In anticipation of our Foolproof KAL, I made a hasty start on my project. I know I’ve got all week to choose yarn and get organised, but I got a bit ahead of myself. I’ve mentioned in our Ravelry group that it’s OK to cross-post in this month’s KALs, since it’s possible for a project to cover both. I’ll be cross-posting this in our handspun KAL too: (Yes, come and join us!)

What’s the most delicious yarn you’ve knitted or spun? All comments posted here will be entered into a free prize draw to win an Inspiration Knits pattern of the winners choosing. Do enter on facebook too, for another chance to win. Note the draws have now taken place and are closed. Thank you for playing.

We’d love to know what you think because we’ve got lots of yarnie interviews, and reviews of positively-edible-yarn coming up – watch this space.

Happy April Fools 2014 – do share the fun with your friends. Have you also tried making the Instant Cowl or the Emperor’s New Mitts?

16 thoughts on “Spinning a Yarn”